The 5 emotions in Traditional Chinese Medicine

For the Chinese bioenergetics' system, as well as for Traditional Chinese Medicine (TCM), all natural phenomena can be led back to the 5 basic elements. The Chinese term of Wu Xing can be translated with '5 movements'.

This interpretation helps to understand the dynamic features of a cyclical progression:

WATER: the initial and final phase of each cycle, the reserve tank that provides the energy to start any action.

WOOD: the beginning phase once the action starts; growth, climbing.

FIRE: the maximum expansion and realization, the fulfillment of each action.

METAL: folding back, closing up, return. The action is done and one gets ready for a new start which will begin with water.

EARTH: the central, stabilizing element, the balance between all the different dynamics.

Let's take as an example the natural cycle of a plant throughout the seasons:

In winter there is the seed, which contains the potentiality of the plant; the seed grows in springtime, makes fruits in summertime, loses its leaves in fall, rests in winter to start again with a new cycle. The earth nourishes the plant and regulates its development, especially during each change of season.

THE 5 ELEMENTS IN MAN

Many years ago, Chinese people created a holistic picture of the world, where each individual phenomenon could be explained through universal principles and could be related to all the other phenomena.

As it happens to all natural phenomena, man too responds to natural laws that regulate the relationship between the 5 elements.

This way, each element corresponds to an organ, an entrails, a tissue, a sensory organ, which in turn gets associated with the specific characteristics of each element: color, season, climate, etc. 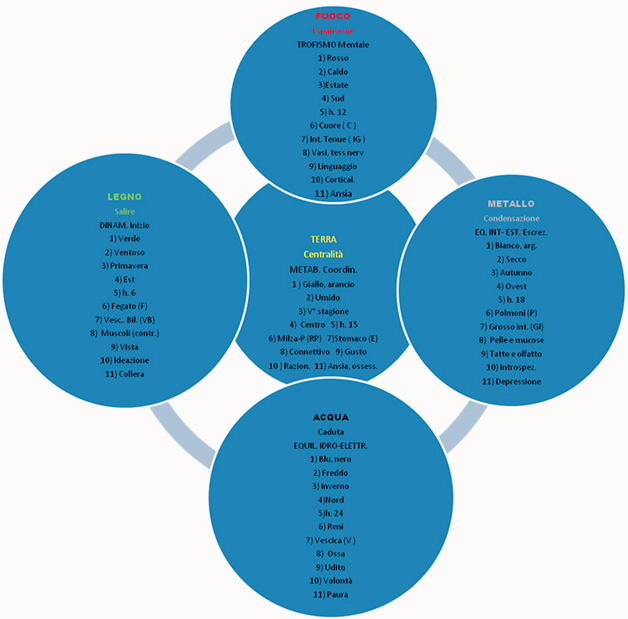 The psychic expression of each individual too – as emotions – can be associated with the theory of the 5 elements. The approach is quite different than the psychic one of traditional western medicine: in TCM each emotion is related to a specific element and, therefore, to different phenomena associated with it:

This way one gets a global sense of the psychic sphere: every reaction in the emotional sphere can be read as the response and interaction with other phenomena according to principles and laws of the 5 elements. This picture includes, for example, emotional responses to different climatic conditions (meteoropathy) or the connection between organs and entrails and particular emotions (psychosomatic reactions).

The laws that rule the relationship between the 5 elements are quite complex; we will examine here only the law of resonance (or affinity), according to which phenomena related to a specific element interact between them following a 'mechanism of reinforcement' (on a functional-energetic base).

According to TCM the state of health corresponds to a situation where energy flows freely throughout the entire body and the individual is able to harmonize with the external world. As far as the psycho-emotional sphere goes, if the energy can flow freely one can express the emotions connected to each related element (or organ). These are considered positive emotions, the ones that bring a sense of pleasure and fulfillment.

On the contrary, when for whatever reason – internal or external to the individual – the energy is not free to flow the emotional expressivity gets blocked: instead of being a source of pleasure it causes a sense of discomfort and unhappiness (negative emotion). The discomfort one feels – which can reach a stage of true psychic suffering – is equivalent, on an emotional level, to that of 'pain' felt on a physical level. This is the symptom, the emergency light, which indicates that something is wrong. The main goal of TCM is to identify and eliminate the real cause of the problem, associating a treatment anti-pain to alleviate the patient's discomfort.

PRACTICAL EXAMPLES (according to TCM)

The treatment of psychic problems connected to negative emotions represents one of the essential elements of TCM and therefore cannot be synthesized in a few lines. We will examine only a couple of examples that show TCM's approach in some specific situation.

To each element corresponds a positive and a negative emotion. Let's examine metal and its corresponding organ lung. The lungs represent, on an emotional plane, the relationship established by each individual with the external world, with the surrounding environment, with 'the others': if the energy flows freely relationships open up, allowing a fluid exchange with the others and a pleasant feeling in human contacts. If this balance breaks up, instead, like in case of a serious psychic trauma – the loss of a loved one or a heavy disappointment, emotional or job-related – the person can shut down, retreat inside himself with a series of emotional nuances that can go from sadness to melancholy to depression, until they reach – in worst case scenarios – to suicidal attempts.

The psychic phenomenon is connected to a precise somatic reaction: whereas the healthy person opens his/her lungs and fully breathes in, the depressed person tends to close his/her chest and curve the shoulders, limiting his/her breathing to the minimum extent. This causes a somatization disorder that can lead to physical issues on a respiratory level and transforms into specific pathologies (once tuberculosis was associated with depression and with suicidal tendencies; one example to remember is the Italian poet Giacomo Leopardi). We need to remember, nevertheless, that things can go two ways too: serious respiratory problems can lead to an attitude of closeness on a psychic level, which can enter a vicious cycle where both conditions, psychic and physical, reciprocally fuel themselves.

According to TCM, these cases can be treated (if the condition is not yet extreme) acting upon the functional sphere of the lung through what is called a 'mechanism of tonification' (energizing the lung).

In TCM – and generally in Taoist philosophy – emotions are just a particular energy, connected through its affinity to the corresponding element and organ. Emotions in particular seem to have a vibrating wave similar to that of sounds and colors. As you can see in the table above – where each element is connected to different phenomena – there are colors capable of harmonizing or disrupting the emotional balance (depending on the subject's condition). It is equally evident that specific sounds (like for example different kinds of music) can modify the psychic subjective conditions, generating either pleasant or unpleasant sensations.

Chinese people, furthermore, elaborated a series of exercises based on specific sounds that can harmonize the psychic energy of each individual organ. By putting together specific sounds (defined by master Mantak Chia as 'healers' or 'sounds of wellbeing') and specific colors one can activate the energy of each organ: these are exercises of Qi Gong and their main goal is to balance out the emotional energy of the organs, transforming this way negative emotions into positive ones.

The sound of the lungs – layout: 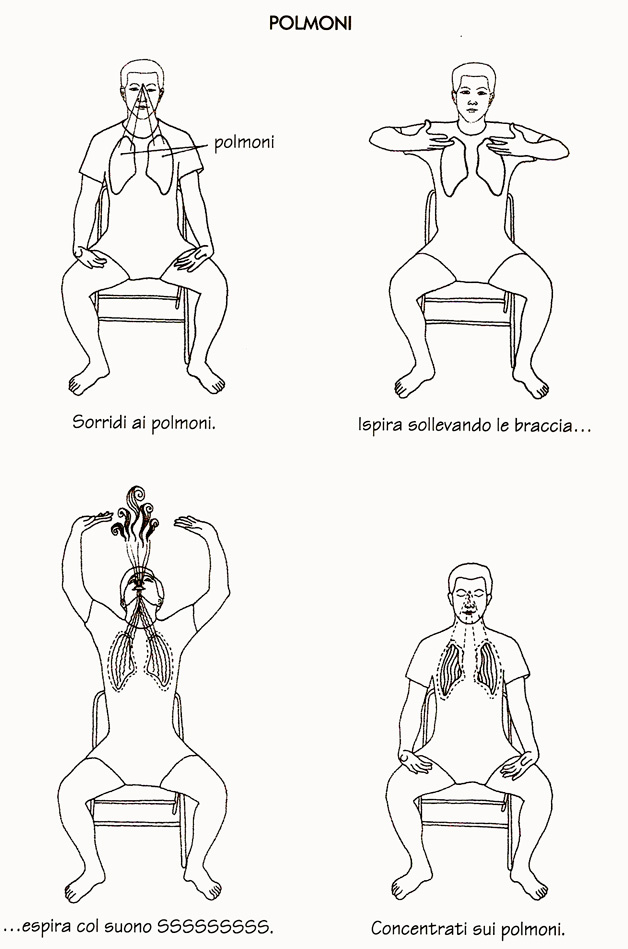