By Andrea Pascale, psychologist and psychotherapist 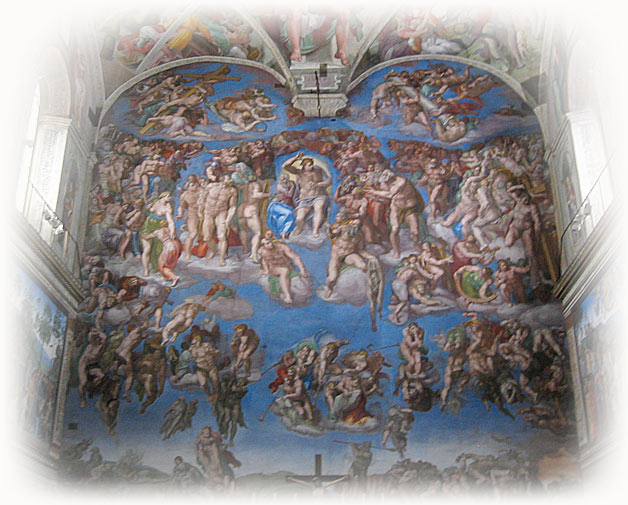 Observe this masterpiece: it is powerful and evocative, yet a careful look can catch other nuances; these are not only related to the beauty of forms and colors but to the description of a human experience which appears in all its facets, including those connected with fatigue, pain and suffering.

Michelangelo left us this immense legacy: who observes carefully the face of any of the prophets – symbols of the human figure – cannot miss to recognize the grief weighing on them. He was projecting his emotional state on these images; he was a tormented man, fighting bravely against power (Pope Julius II), challenged and humiliated by his colleagues and forced to fight with a weapon – painting – which was not exactly his first choice (we all know he was a sculpture).

The artist represents the emblem of man, his frailty and weakness, a man who is facing his own solitude.

The amazing thing is that this incredible artist is leaving us an eternal trace about how one can face pain, emotional and existential suffering: he is showing us that the only possible way to deal with it is to find its meaning, its significance.

This is man's eternal struggle; this is the endless journey that, from antiquity onward, we haven't been able to avoid: the quest for the meaning of pain.

Thanks to his genius and his exquisite intellectual refinement, Michelangelo is able to explain the nature of that emotion through the faces of the characters on the Sistine Chapel: we are not talking about physical pain – obviously – much easier to recognize and accept; we are talking about something quite different, connected with life itself and its essence, something that often seems impossible to understand because it comes from deep within our entrails to invade everything that belongs to us, our self, our way of being, our relationships, our thinking, our emotions… everything. All is eaten by an emotional and existential grief that psychiatric and psychological medical science identified and named, a sort of entangling 'tar' that contaminates everything, impossible to get rid of; a different pain that is not consumed by itself and is not related to the individual alone.

The example of the Sistine Chapel – powerful and absolute as it is – shows us also how man can find within himself the possibility to elaborate those experiences that otherwise would destroy him… creativity and expressivity often are the subjective instruments for survival. It has not been long since humanistic sciences helped explaining to what extent human beings are equipped to deal with pain, thanks to their 'resilience', meaning the sum of those features that allow resistance under extreme physical and psychological suffering conditions. There are several proofs of this human attitude, one of which is the survival of men and women while in Nazi concentration camps, a literally destructive and annihilating experience.

All this to say that life itself is deeply connected with pain and that we cannot forget two essential elements: man cannot hope for an existence free of pain, yet he possesses within himself all that is needed to deal with it, to face it, elaborate it and transcend it.

During what we call a 'post-modern' era this attitude towards pain seems forgotten or repeatedly eluded: we try at all costs to avoid pain following the endless race of a science that is capable to anesthetize us from all evil. We know this happens with physical pain, yet it is even truer for what concerns the emotional universe: Umberto Galimberti wisely shows us that it is not sufficient that our children are healthy; we want them to be 'happy', serene, and free of problems, worries or suffering.

Only when we give up this utopist thinking will we decide to live entirely and sincerely in the maximum human and existential expression: consciousness. Here we finally face one element that has been the object of an infinite number of literary, poetic, artistic and philosophical works: the quest for ourselves. Knowing ourselves inevitably forces us to tolerate a certain doses of suffering. This universal aspect is as undeniable as it is hard to bear: the destiny of the Sapiens-Sapiens man, because of his unique possibility to develop an introspective and metacognitive view, is to live fully his existence, including disruptive feelings like grief, solitude, uncertainty, sadness.

This is what I mean when I speak about 'existential pain': using Vito Marcuso's words – a philosopher – I would say that we are talking about a 'spiritual suffering', that is, about that part of our psyche related to conscience, to the awareness of being alive, that same part that knows how to "look at the world as a whole, recognizing its meaning, justice, beauty and truth".

The psychologist Maura Anfossi talks about this 'knowledge', this way of sensing ourselves and our place in the world, this internal journey that is so special and unique within the whole of creation: human growth throughout all its stages – from childhood to old age – involves the acquisition of a progressively more realistic vision of the world and, therefore, of a contact ever more direct with imperfection, injustice, absurdity and pain.

"... we are destined to suffer and yet thanks to this fact our lives will be remembered forever…", these were the words of Helen of Troy to Hector while he was hesitating before his last battle. The only chance we have – if we choose to live fully and truly the human experience – is to do what Hector did: turn around and look at his destiny straight in the face, seeing his life with all its limitations and sufferings as well as recognizing the beautiful power it emanates. Homer tells us about a man who, alone with himself and thanks to the words of a woman, Helen, finds the courage to go towards death, knowing that that was his fate and it was pointless trying to avoid it. One cannot flee from oneself.

The difference is always made by the meaning man finds in his pain: this is the incredible human chance; this is the way to face, elaborate and transcend – consciously – any kind of suffering, as atrocious and unjust it can be.

"…You can do to me whatever you want, but you will never take away from me the possibility to give a sense which is mine, and only mine, to the pain you are afflicting me with. I am the only one who has the power to find meaning in my suffering…"

These are the words of Victor Frankl, who lived the experience of a concentration camp, yet they could belong to any man who met the dimension of pain… Each one of us has to find his or her path towards this goal: Michelangelo did it through the Sistine Chapel and his quest enriched the world for all eternity.