A bit of Traditional Chinese Medicine

The approach of Traditional Chinese Medicine to allergies is quite original. To better understand it we need to provide a few elements that are at the base of TCM.
The largest amount of diseases, according to TCM, is caused by an energetic imbalance in the principal internal organs. Drawing a simplified layout (reality is much more complex) we can pinpoint some of the phases: in a first phase (latency) the imbalance remains hidden, yet it can already be recognized through TCM diagnostic instruments (wrists, tongue examination, slight functional disorders, bio-energetic anamnesis, etc.). In a second phase (symptomatic) the first disorders start to manifest themselves, together with the first signs of organic injuries (such as the ones diagnosed by tests and examinations in western medicine). In a third phase the disease becomes fully manifested: the organic injuries worsen with time and lead to the fourth phase when the disease turns chronic. Finally the disease reaches a totally irreversible stage.
TCM faces diseases and disorders with a double approach: on one hand it tries to identify the deepest causes of the energetic imbalance and to find the proper tools to solve the problem; on the other hand it tries to handle the patient's discomfort (physical and/or psychological) with a symptomatic treatment.

Etiopathogenesis of allergies according to TCM

According to TCM, the imbalance at the base of the allergic phenomenon is represented by an excess in the Liver, associated with a deficiency in the Lung.

Let's examine the meaning of excess and deficiency (full vs. empty) according to TCM. In Traditional Chinese Medicine and organ is full when its energy is in excess; this can be due to several causes which can be summed up to two main ones: exogenous causes – coming from the outside – and endogenous causes – due to an internal imbalance of the individual. When an organ is full it works in excess, drawing energy from the other organs that become weaker with time (related emptiness or deficiency of another organ); ultimately the situation degenerates until the first organ reaches a stage of total lack of energy (or emptiness or deficiency), corresponding to a total insufficiency in western medicine.

In TCM the Lung is the antagonist of the Liver. It is normal, then, that when the Liver is overworked, the Lung weakens. But let's examine how TCM considers the Liver and the Lung so that we can draw a parallel with Western Medicine.

In TCM organs are not considered from an organic standpoint, but from a functional one. The Liver, in TCM, has what is called a defensive function, in other words it responds to external aggressions. This function corresponds to the immune response in Western Medicine, that is, to the production and circulation of antibodies.

The Lungs, in TCM, have a modulating function: they regulate the entrance of exogenous (external) energies into our organism. All those organs and functions related to the external environment are included into the energetic sphere (Loggia) of the Lungs; in practice respiratory tracts, skin and colon.

Western Medicine interprets the allergic phenomenon (simplifying) as an abnormal and excessive antibodies' response (see the Excess in the Liver phenomenon for TCM) that provokes a series of reactive phenomena due to selective zones of our organism. These zones are respiratory tracts, skin and colon. The same ones we just saw being related to the Lung and that are experiencing a deficiency (emptiness) according to TCM.

We can therefore state that the basis to interpret the allergic phenomenon is similar in both TCM and Western Medicine (beyond the different wordings). The difference – we shall see – lies in the therapeutic approach.

Etiological therapy of allergy according to TCM

Once the cause has been identified, TCM tries to set up a suitable therapeutic plan. If there is an Excess in the Liver and Deficiency in the Lung we need to disperse the energy in the Liver and tonify the Lung in order to increase the energetic level. We can achieve this goal by different techniques used in TCM (pharmacology and diet based on the 5 elements, reflexology, massage, etc.). But the best results are achieved with acupuncture. The therapeutic treatment is essentially based by acting onto the Liver dispersion points (2LR and 3LR*) (fig. 1 and 2) and onto the Lung's tonifying point (9P) (fig. 3). Often times Liver's dispersion points bleed: this should be considered an extremely positive sign because it means that the Liver is being freed from an energy excess.

*These points have also a general anti-spasm action which is particularly useful in cases of asthmatic attacks.

The traditional Chinese approach to medicine (as well as to all other aspects of reality) is extremely practical and pragmatic. In Chinese it is said, yong, bu yong (it works, it does not work or it is useful, it is not useful, or it is valid, it is not valid). The theoretical foundations can be interesting, but they are totally useless if then, in the practical application, the treatment does not work.

In case of allergies the therapeutic approach of TCM has been proven very effective. In my experience, all cases dealt with the proper way (acupuncture practiced before springtime) have constantly reduced disorders caused by seasonal allergies (allergic rhinitis, asthma, sinusitis, skin irritations, etc.). In some cases the problem has been completely resolved within three years of treatment.

It is possible to treat allergies with acupuncture. The procedure is different for each case, according to the symptoms and to the individual areas affected by the problem. This treatment is suitable in springtime, especially during pollination. In these cases the symptoms improve quite a bit, due to the analgesic/anti-inflammatory localized effect of acupuncture, without – nevertheless – reaching the deeper action of a preventive etiological treatment.

The purpose of this article is purely informative. An exhaustive and complete analysis needs a deeper knowledge of the principles and treatment methods of TCM.

Furthermore, we remind the reader that the use of any therapeutic treatment (like acupuncture) is of specific competence of certified physicians. Disregarding this legal norm can lead to serious consequences. 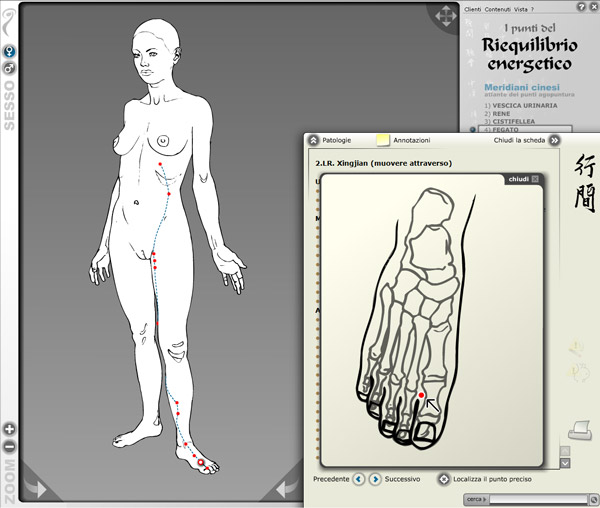 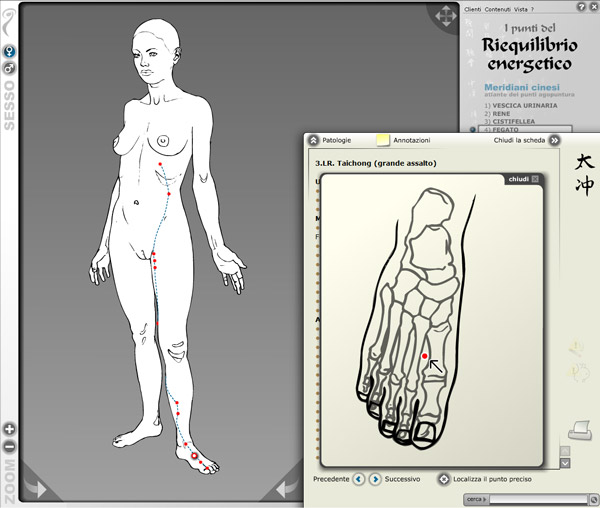 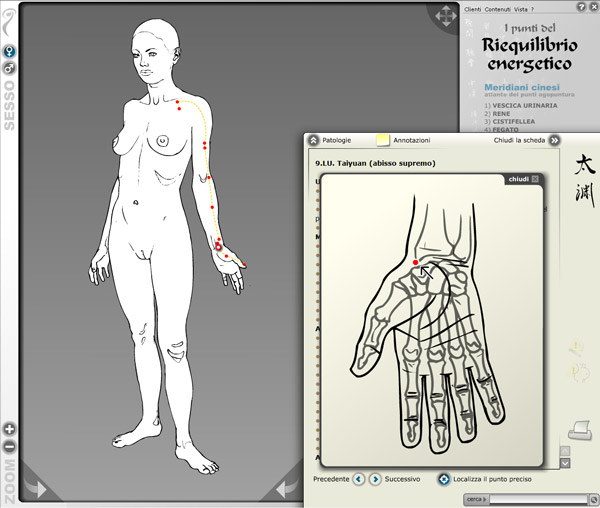 *Illustrations taken from the App "TsuboMap - Points of energetic rebalancing"