The complete respiration of the spine (II)

It is necessary to introduce a few basic concepts.

'CURIOUS' OR 'EXTRAORDINARY' CHANNELS (MERIDIANS)
They are called this way because they present different characteristics and different paths from the 12 classic Organ Meridians. Through these channels runs a particular kind of energy called JING (the essential energy related to genetic-reproductive functions). This energy, stored in the gonads and connected to the renal function (in Traditional Chinese Medicine) is distributed throughout the whole body via Curious Meridians and from these – through a tight network – it reaches every single cell. It carries, moreover, genetic information in order to regulate, modulate and coordinate all the different functions of the energetic body.

It is easy to understand the importance of a regular flow of this energy, Jing, through the Curious Channels. According to Taoist tradition, if Jing flows freely man does not get sick. The main obstacles to its flow are inherited and behavioral conditioning, exogenous and environmental factors, psychological-emotional blocks, bad habits (for example wrong eating habits) and also postural flaws which prevent the proper functioning of the body, obstructing this way the flow of other forms of energy.

Within the 8 curious meridians, 2 of them are particularly important:

The Governor Vessel. It flows along the rear part of the spine with an upward direction (yang) from the perineum to the top of the head; then it descends toward the upper mouth.

The Conception Vessel. From the lower mouth it descends along the median line to the perineum (yin).

By attaching the tongue to the palate and slightly rising up the anus (a suggested practice in different traditional disciplines) we shut the top and the bottom of the circuit of the two meridians generating what is called: 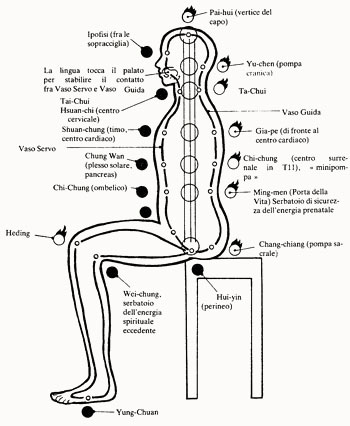 There are several techniques that can be used to activate energy through the Microcosmic Orbit. They usually include visualization techniques (Taoist meditation) which develop awareness on the basic Orbital points connecting them. They are complex techniques and can be learned only from certified masters. Another way to increase awareness and activate the energy of the microcosmic orbit is energetic or manual self-massage (reiki, pranotherapy, etc.).

Yet another way to activate the Microcosmic Orbit is through the Respiration of the spine.

RESPIRATION OF THE SPINE AND MCROCOSMIC ORBIT
Breathing is the bridge between the physical dimension and the energetic dimension (ethereal energy, pranic energy, the Qi, the Jin). Progressively slowing down the rhythm of our breathing (taking longer and deeper breaths) we reach a point where the body and its movements are not in control of breathing anymore. The brething itself controls the movement which slows down and becomes ever more imperceptible. At a certain point the flow of energy itself (Jing) guides our breathing and movement. Then, at a higher level, movement is not necessary anymore because the energy of the Microcosmic Orbit activates spontaneously. Some very powerful techniques of Qi Gong and of Chinese Martial Arts are based on this principle (fajing – energy emission).

They are complex practices and it is recommended to learn them from qualified instructors. Nevertheless, everyone can safely practice the Respiration of the spine because, even if executed by beginners, in an unconscious way it can activate (partially at least) the flow of energy of the Microcosmic Orbit.

Advanced techniques
The advanced Respiration of the spine implies a wide energetic work which includes the activation of different energetic centers (called dantian, tantian, chakra, etc.), in a harmonious relation to the different points of the Microcosmic Orbit. Being an advanced technique it is reserved to expert practitioners and can be taught by masters of a certain level.

It is the true Taoist breathing. It is called inverse because the movement of the abdomen is opposite to classical breathing: during inhalation the abdomen contracts and during exhalation it expands.

All previous exercises lead to spontaneously activate this kind of breathing (Respiration of the spine, Microcosmic Orbit). It is a very powerful breathing technique that can be found in the animal realm as well as in primitive tribes (that's why it is thought to be the true natural way of breathing); it occurs unconsciously in cases of very intense efforts.

The regular practice of the Respiration of the spine and other similar exercises can become natural and habitual.

It complements the respiration of the spine. During inhalation the kidneys contract and get closer, during exhalation they expand and stretch outwards. With this exercise we can work on the energy linked to the kidneys (for TCM). What is truly being stimulated is the suprarenal cortex that awakens the production and secretion of endogenous cortisone, with energizing and beneficial effects to the organism, unlike the exogenous one which can produce collateral effects.

A further development of the exercise leads to the Respiration of the Waist, where all the area embracing the kidneys laterally, the zone between the solar plexus and the navel in the front and between the 11th thoracic and the 2nd lumbar in the back, contracts during inhalation and expands during exhalation. From a bio-energetic standpoint this is the equivalent with activating the energy of the Meridian of the Waist, another Curious Meridian.