A sleepless night at Asclepius' Club

The clock struck midnight and all of the sudden the atmosphere magically changed. I always wonder how our club during its nighttime opening hours becomes filled with such a special vibe. I couldn't quite pinpoint the reason for this: lights, music or our nighttime maitre. Right, you don't know him: he is a tall man with oriental features (maybe Indian) and he is always smiling. He confessed that his real name would be impossible to pronounce and therefore he makes us call him Asmir.

So we were saying… Right! It was midnight and I was drinking a steaming cinnamon spiced tea when Wilhelm asked me,

"Why do we need to sleep? It goes against the pleasure of spending time in this wonderful atmosphere."

"Sleep is necessary to our brain in order to reorganize impulses and its internal activity. Wrongly one thinks that during the sleeping phase the brain is 'resting', but - on the contrary - it is having an elevated activity in specific areas which are less utilized during waking hours. The brain in this phase reorganizes the data accumulated during the day."

In that moment Asmir started playing an oriental melody on a strange instrument that I had never seen before. All of the sudden I felt invigorated.

"Listen to this music: its vibrations are undoubtedly influencing our mind, giving it new energy. On the other hand it is well known that our brain emanates waves which reflect the state of activity when we are awake as well as when we are asleep."

"It is so true! – replied Wil – Music has an immense power that is widely recognized; think about Tibetan bells used in meditations. I heard about Theta waves, could you explain to me what they are?"

"As I was saying waves represent the cerebral activity based on the electric and chemical activity of neurotransmitters2. They are measured through the encephalogram and vary during the day. During sleep – for example – low activity waves alternate with others, characteristic of the sleeping state. Theta waves indicate a deep state of meditation where both sides of the brain come into play and one concentrates on internal stimuli."

"Therefore by stimulating a specific brain wave one can influence cerebral activity?"

"As you were saying, music, sounds, mantras and even notes of a specific frequency can be used to stimulate specific brain waves. This is used in meditation and also to stimulate attention or induce sleep."

Wilhelm took upon a dreaming expression, "To sleep an entire night in a nice and comfortable bed, in a relaxed position which allows us to feel the whole weight of our body as it is taking shape on the mattress without feeling any muscular or articular tension or pain, with our mind free from worries related to family, job, school or the world that is falling apart, so that we are able to recover the energies both on a physical and mental level… Is all this possible? Or is it only a dream? Is there anyone who can actually do it?"

I replied, "Right, for most people it is but a dream; let's not draw the usual percentages of how many are suffering from insomnia or of the various types and causes that determine how serious it can be… we know the numbers are high, too high; women are the most affected."

Professor Augustus spoke next (a lovely old man, with an enigmatic look from behind his glasses definitely too thick. Yet, in spite of his appearance, he a very clever and acute mind):

"Sleep is a passive state detached from reality when the physical part takes the opportunity to recover its strength and regenerate itself; it is known that during REM phase the entire metabolism increases and helps this way the organism to store energy, while the renal apparatus and the liver efficiently eliminate toxins, much better than when during the waking state; the immune system produces more antibodies, the marrow 'makes' more red blood cells (RBC), the growth hormone is produced in higher quantities, etc.

At this point sleep might seem a simple parenthesis between two days when, for a short period of time, that relation to the real world – which makes us vigil and alert – is momentarily lost; the person falls asleep, turns off light and brain at once, sinks into a sort of limbo and loses touch with the real world until the morning after. In fact things are not exactly this way: thanks to the discovery of electromagnetic brain waves and of encephalogram it has been possible to demonstrate that sleep belongs to the biological day of every individual and that waking state continues in a different way when one sleeps. The brain slows down its activity but it never stops: it elaborates those stimuli collected during waking state, organizing its own system to store data and eliminating the unnecessary ones; it lays out the brain activity for the next state in order to be able to utilize, once awake, the entire baggage of collected notions to elaborate new ideas, instructions, strategies (many of the greatest inventions of man occurred during sleep) and all that allows the individual to work and express himself at its best."

Having said that, he took his bowler and cane and went out of the Club with a smile.

After a moment of silence Wilhelm invited me to continue with a look.

"Insomnia can have many causes: from daily stress accumulated in working environments to family, kids, excess of fatigue, worries of all kinds… and let's not forget about damages caused by bad nutrition or, even worse, by foods not compatible with our bodies; even a bad mattress or annoying noises and physical pains that show up at nighttime when we start relaxing, when our muscles get ready to recuperate: that's when chronic pains sneak in, disturbing the regular and natural course of our rest. What do you think Wilhelm?"

"A part from all the cures or specific treatments that can help us, coming from medicine or psychology, as I was called here in my role of Shiatsu therapist I feel that my duty is to highlight how helpful massage techniques can be." (See Shiatsu meridian treatment3)

After saying this we remained in silence. Maybe I was to stay sleepless tonight… but cuddled by music and in company of my friends I felt happy.

1. Brain waves:
Alpha waves, 8-13 Hz
They correspond to a relaxed waking state where cerebral receptivity prevails. They are used to improve memorizing ability

Beta waves, 14 Hz or more
They correspond to the normal activity of the cerebral cortex. They can be found in dreaming state too

Inferior Delta waves, lower than 4Hz
The brain is recovering at its minimum activity, like in deep sleep

Theta waves, 4-7 hz
They appear in some sleeping phases and during meditation. They are harmonizing waves: during sleep external and autonomous stimuli are brought back to balance.

2. Neurotransmitters: Our brain regulates each and all aspects of the conscious and autonomous life of our bodies because it balances out its inner substances, whose task is to bring specific messages (neurotransmitters) from one side of the brain to the other. Each part of the nervous system works with a specific substance, which represents a specific function. For example in the Parkinson disease, whose main characteristic is the progressive loss of the muscles' ability to relax, the production of dopamine diminishes progressively. Each function therefore consists of balancing the impulses and the neurotransmitters themselves. In particular during sleep there is an important reduction of the cerebral cortex activity (which is also the home of our conscience). The nucleus of such phenomenon is to be found in the Hippocampus (fig. 1): an area in the very center of the brain and that all the animal kingdom has is common. Our biological clock is provided by the reticular system of activation made by the nervous cells originated in the cerebral trunk, which is the most ancient and primitive part of the brain, which then extend themselves until they touch almost all the other brain cells. This way the reticular system of activation allows the signals transmitted by its neurotransmitters to arrive everywhere. These connections make us understand how much sleep depends on the mental, physical and emotional influences that mark our lives.
In order for us to better understand the importance of neurotransmitters we should think about melatonin, substance produced by the pineal gland: this hormone bears multiple functions and it is particularly clear that its level is sensibly reduced by daylight. The intake of melatonin supplements to treat jetlag confirmed its influence on sleep.
Research on these substances continues as their functions are not yet completely known, especially in relation to neurodegenerative diseases.

Insomnia from KIDNEYS failure. An excess of fear weakens the kidneys. This generates difficulty falling asleep, waking up during the night, together with lumbar aches, auricular buzzes, vertigo, palpitations, red face, bones and sternum pains.

Insomnia from STOMACH dysfunction. Excessive eating can harm the stomach, which can be the cause of insomnia through difficulty falling asleep, waking up during the night together with gastric pains, rashes, heaviness, bitter mouth. 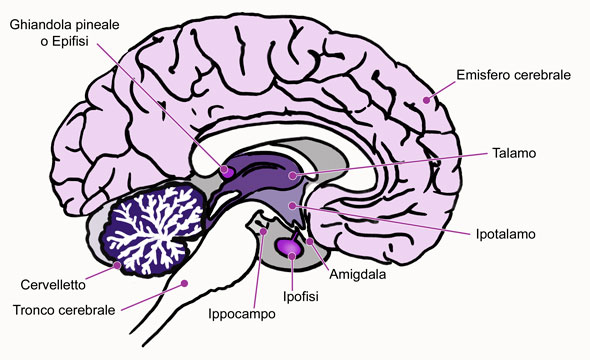