By Roberto Merante and William Giordano

The members of Asclepius' Club were all absorbed into the soothing perfume of a jasmine tea, thoroughly enjoying their monthly meeting. That night I – Thomas Karinskij, the doctor of the group – was there with my friend William Schneider. The latter was famous to have learned the sublime art of massage during his pilgrimage around the world.

"Thomas: why do neck muscles alter so easily and – at the same time – are they so difficult to treat?" After such a sudden question I had to put down my cup and pick up my pipe (remembering right away the atrocious vengeance that was going to come my way had I dared to light it up!).
"Look Wilhelm: the cervical spine bears the task to support the head and, at the same time, allows its maximum mobility through space. One of the characteristics of this section is the predominance of the vertebral channel1, which hosts in its interior the largest tract of the spinal cord. Ligaments and muscles are placed in order to guarantee the maximum movement control of each vertebra. This control is so precious and delicate that its smallest alteration can jeopardize the balance of the column in its entirety."
Wilhelm replied, "So you are saying that when neck pain is caused by muscular contractions or blocks, stress, bad postures, manual jobs – where workers repeat the same movement over and over again, like in assembly lines or office jobs seated in front of the screen all day – and in case of heavy sports which demand and provoke strained efforts in neck and shoulders areas it is highly recommended a regular massage treatment. A good massage therapist can act deeply on the muscle fibers and treat painful blocks and contractions."
"Certainly, but when the pain has reached an acute phase the muscle can contract because of an inflammation2; this, as you know, produces an increased blood flow in the tissue. Don't you risk worsening the situation by treating it manually? Would it not be more advisable to choose a pharmacological therapy in that case?"
"Dear Thomas, as usual you play the part of the devil's advocate! Certainly cervical pain gets more complicated when additional conditions are diagnosed, such as traumas or sudden sprains, hernias or protrusions of the disc, with consequential cervico-brachial neuralgia3, pains radiating to shoulders and arms until they reach the fingers. In these cases massage cannot solve the problem because of the acute pain, the stiffness of the column and the advanced inflammation. Nevertheless it can offer relief if done delicately and together with a proper pharmacological treatment."

While he was saying all this I could observe his smile through the steam coming up from his cup, "I am sure you are about to add something. Don't be shy … go on!"
"Well, since you ask for it… I want to add that in these cases certain techniques can be quite useful, such as the ones used in Osteopathy4 or Chiropractics5: both can mechanically restore the balance disrupted by the above symptoms with aimed manual techniques like tractions, mobilizations and pressures, that are going to move the vertebral discs and give back some of the lost flexibility; the result is a pain and inflammation reduction at the same time."
"Nice! Yet this is true for the kinetic muscles6, responsible for head and neck movements and under control of the will, which influences the posture of these areas - like the superior muscular layer of the trapezius and the sternocleidomastoid. But what do you have to say about those postural muscles responsible for opposing gravity and maintaining in axis the vertebral articulations, keeping in balance the Head-Neck system? For example how does a wrong manipulation influence muscles linked to the Atlas and Axis7, which regulate the synchronicity between the position of the head and the position of the eyes in the focusing of vision? Does not one risk worsening the person's posture?"

A minute of silence followed, while Wilhelm sipped from his cup; then he placed it back on the table and said, "Usually the treatment is followed by specific exercises to do at home; these are quite useful because they consolidate the results obtained through the massage and help developing a certain flexibility, necessary especially in older patients, as they tend to lose it faster than younger ones. We should never manipulate a patient with pain in its acute phase and it is always mandatory to differentiate between a pain induced by a mechanical issue and a pain caused by an inflammation: the latter should always be treated by a physician or physiotherapist." After a short pause, during which he looked at me straight in the eyes, he continued, "As you well know, in case of a severe local hyperemia8 it is always better to choose aimed treatments such as reflexology, digitopressure, shiatsu and particular techniques of prolonged pressure on specific painful points – called trigger points – mainly because these treatments do not contemplate frictions, kneading, percussions, etc. These techniques are able to eliminate the pain quickly and can notably reduce muscular tensions and spasms, allowing the patient to feel better in a short period of time – except in cases of serious problems on a mechanical level, like degeneration of the inter-vertebral disc, arthritis, etc. Finally, if the physician incorporates a treatment with acupuncture or auriculotherapy9 the picture is complete!"

As if to underline what had just been said, our pianist started to play and I said, "I think that Beethoven goes perfect with your train of thoughts!"
"Thanks, but fortunately you know medicine better than music: this is Bach's Concerto n.1"
I smiled and took refuge into a new cup of tea!

Notes:
1. Vertebral channel: the channel made by the overlapping of the vertebral rings, whose center is a cylindrical hole.
2. Inflammation: tissue alteration with an increased blood flow (hyperemia) with 5 symptoms: pain, redness, swelling (due to an increment of liquids in the tissue), raised local temperature, alteration of the tissue's functionality. These are always present, even though sometimes they cannot be seen externally.
3. Cervico-brachial neuralgia: Neck pain that radiates to the arm.
4. Osteopathy: technique that uses manipulations aimed at restore the balance in articulations and muscles.
5. Chiropractics: technique that, through the manipulation of articulations and vertebrae, stretches them in a controlled way to help them work correctly. In Italy all vertebrae manipulations are legally reserved to physicians.
6. Kinetic muscles: those muscles that are under control of the will and whose role is to make specific movements. Postural muscles, instead, are responsible for maintaining the person's balance and are not under the control of the will.
7. Atlas and Axis: first and second vertebrae of the cervical tract.
8. Hyperemia: increased blood flow in a specific area, caused by a local capillary expansion
9. Auriculotherapy: acupuncture technique that utilizes the nervous reflexes starting in the ear. It was discovered in the '50s by Dr. Nogier. 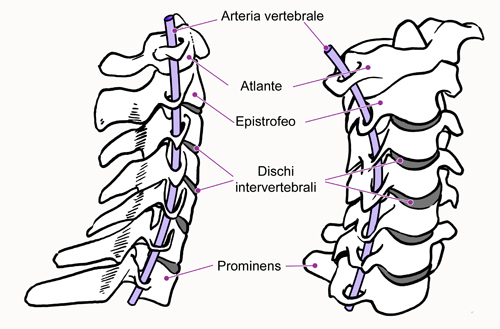 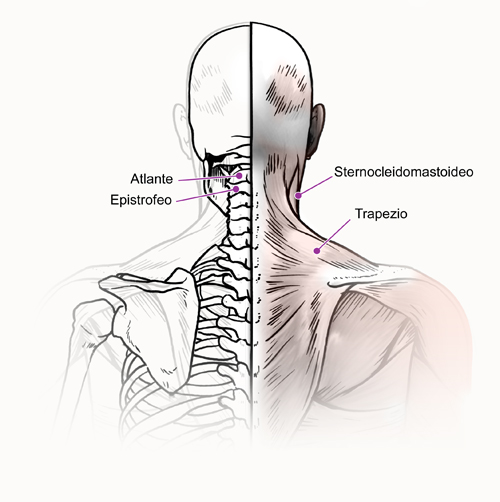 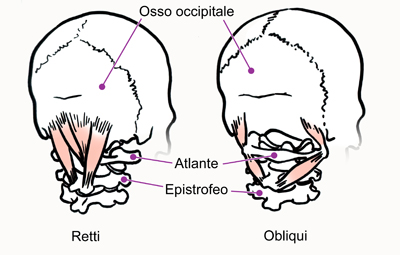